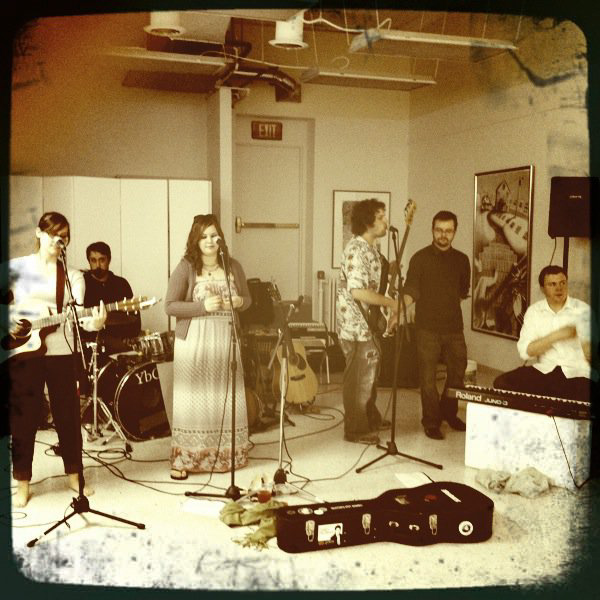 Yearbook Committee started as a recording project in a garage and quickly turned into a monster. A collective of sorts. No lead singer. No sole songwriter. Just a group of musicians with one common goal; to write, record, and perform music.

With a universal love of good music, Yearbook Committee consists of Christina Blust, Jon DaCosta, Travis Dillon, David Goodier, Brad Lone, and Rachel Rasley. Everybody sings. We play lots of instruments (with varying degrees of skill). Quite often other friends hop in too.

A lot of folk. Some of everything else thrown in there too. A whole lot of harmony.

In early 2009, in Terre Haute, Indiana (a town famously satirized by The Onion’s 2001 article “Garage Band Actually Believes There Is A ‘Terre Haute Sound'”), Yearbook Committee was born. A hodge podge of stalwarts of the surprisingly active local music scene, we earned a devoted following almost as quickly as we established an everexpanding repertoire of original songs.

What makes Yearbook Committee different than any other projects we’ve been part of is the truly collaborative nature of each song and each show. We like each other. We laugh a lot. We trade off instruments, share songwriting and lead duties and aren’t afraid to experiment.

We’re happy that our music has caught the ears of our crowds near and far, from the numerous mentions in local press (who say we’re “growing a new music scene from the grassroots up”) to earning a slot at SXSW 2011 and SXSW 2012 to the Facebook fans from random international locales.

We’re proud that our fan base includes music snobs, six-year-olds and our grandmas. We’ve also found that there’s nothing better than starting an evening playing to strangers and ending it with a bar-wide singalong.

“Heading down the driveway on foot to the backyard I hear crickets chirping — or is it a tambourine? As I open the back door, gentle guitar strumming and laughter escapes into the night sky. I descend the stairs and there, in the basement of the Murrays’ house, I find what I’m looking for … This is music happening for the right reasons.”